How to cook with a toddler

No, not cook with the toddler as an ingredient…

One thing that really surprised me coming out of the recent reader survey that I ran was that every single person who responded to the question “what topics would you like me to write about?” said some variation on food/recipes/cooking.

I’m a decent cook but not a great one (although perhaps I should shift my mindset on that and start thinking I am a great chef? Who knows what I might be able to achieve…); I tend to follow and riff on recipes rather than creating my own.  The success I do have is largely due to my long years of experience – I’ve been cooking dinner every night for over 15 years now and in general I can read a recipe and get some idea of whether I’ll like it.  But one thing I have been having a ton of fun with recently that y’all might be interested in hearing about is cooking with Carys.

Carys is currently obsessed with cooking.  Several times a day she points in the general direction of the kitchen and says “See!  See!” with a great sense of urgency.  This is our cue that she wants to begin a kitchen tour, which means she opens all the cupboards, looks inside and then closes them again, points out all the buttons, knives, and spoons she can see (‘fork’ has been slow to enter her vocabulary, for unexplained reasons), and demands to look in any pot, pan, or bowl that is out of place as well as the sink, microwave, and toaster oven.

It’s getting so out of hand that we are currently limiting ourselves to three kitchen tours per day, and I’m telling myself that it’s only a sign of OCD if she has to open and close the cupboards five times in a row, right? 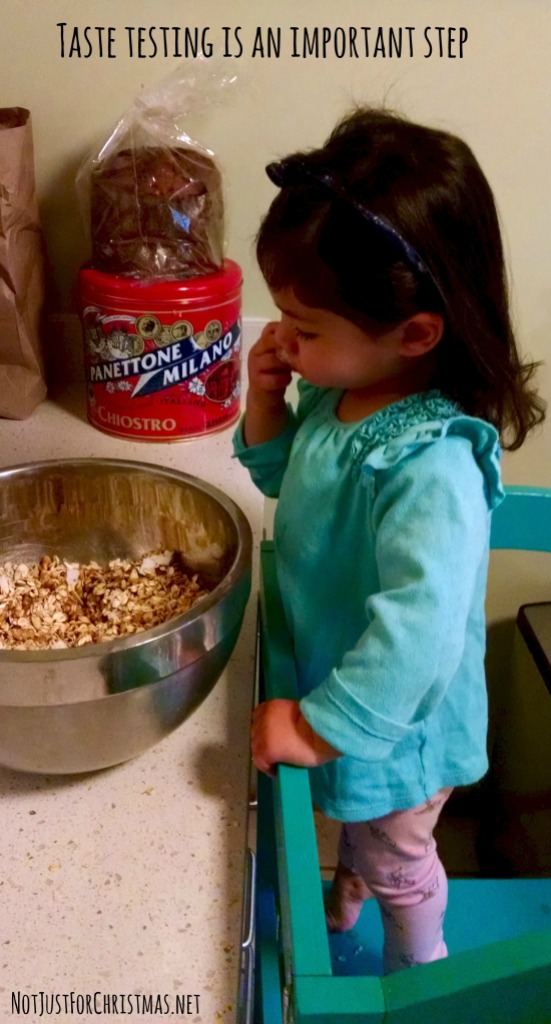 Nanny Meg and I have been channeling her energy into actual cooking with a rather higher degree of success than I might have anticipated, given that she’s all of 19 1/2 months old.  One of our favorite recipes is Alton Brown’s granola; original recipe here and the version we use below:

5 cups rolled oats (up from 3 cups, which we find has us making granola every week and which doesn’t spread the sugar far enough anyway)

1 cup big chips of coconut (unsweetened if you can; available in the bulk bins at my local grocery.  If you can only find the finely shredded sweetened kind, back it down to 3/4 cup)

About the Helping Tower 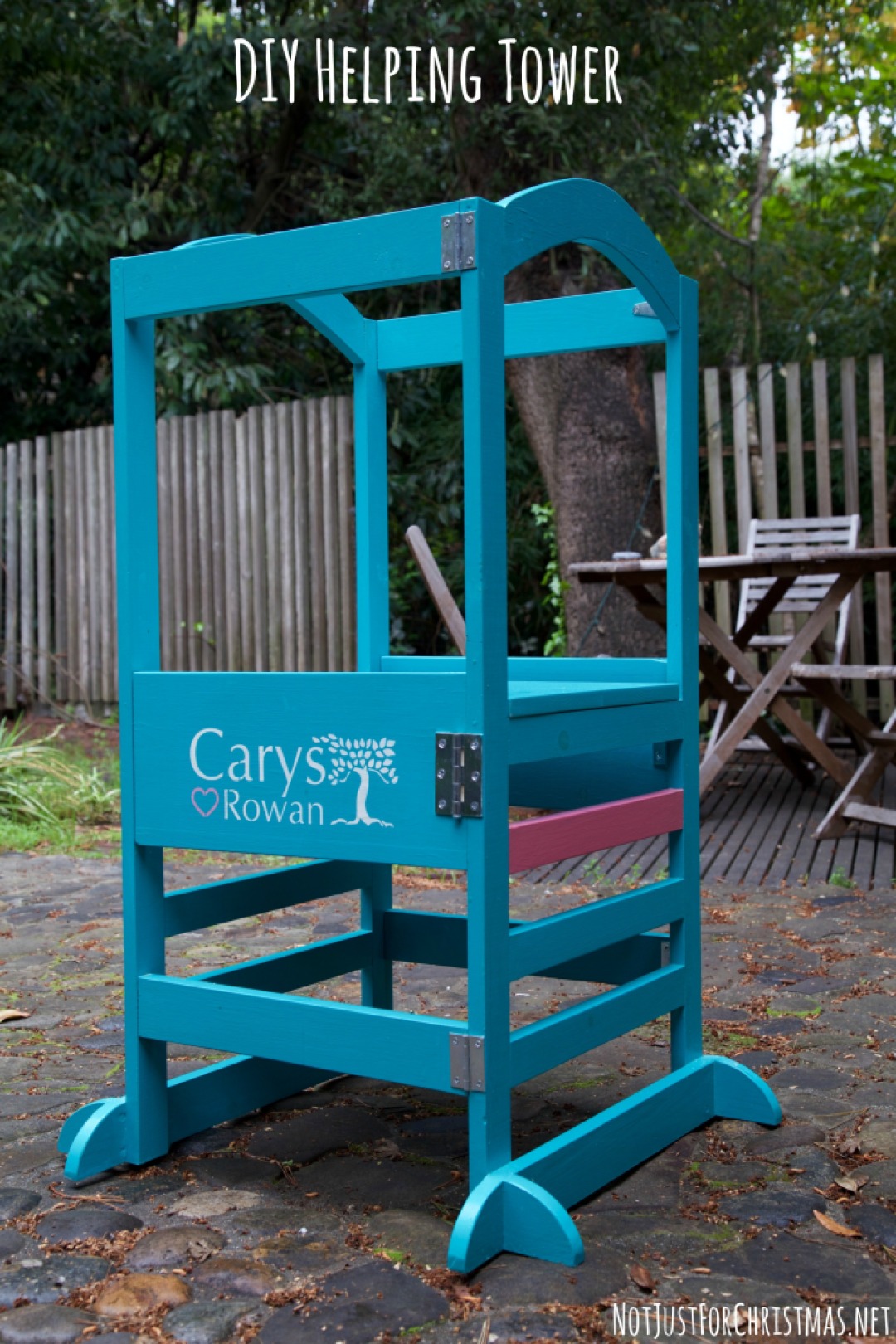 I made Carys’ foldable helping tower almost a year ago from these instructions, and we love it.  I designed the stencil and had it custom made by this guy, who has also done our Christmas cards a couple of times (including the one that was also our pregnancy announcement).  The heart in the design signifies the meaning of her first name (‘one who loves and is loved’), while the tree represents a rowan tree.

We actually don’t fold the helping tower as much as I thought we would because we’re short of skinny, flat storage areas – most of the time we leave it assembled in the dining room, and lift it over the gate into the kitchen when Carys is going to help us.  Our kitchen is too small to have it in there all the time.  She climbs up and down easily by herself, and she’s learning about boundaries in the kitchen – she knows (although she likes to frequently test) that she’s not allowed in the kitchen except when she’s invited in, and that bringing in the helping tower constitutes an invitation. 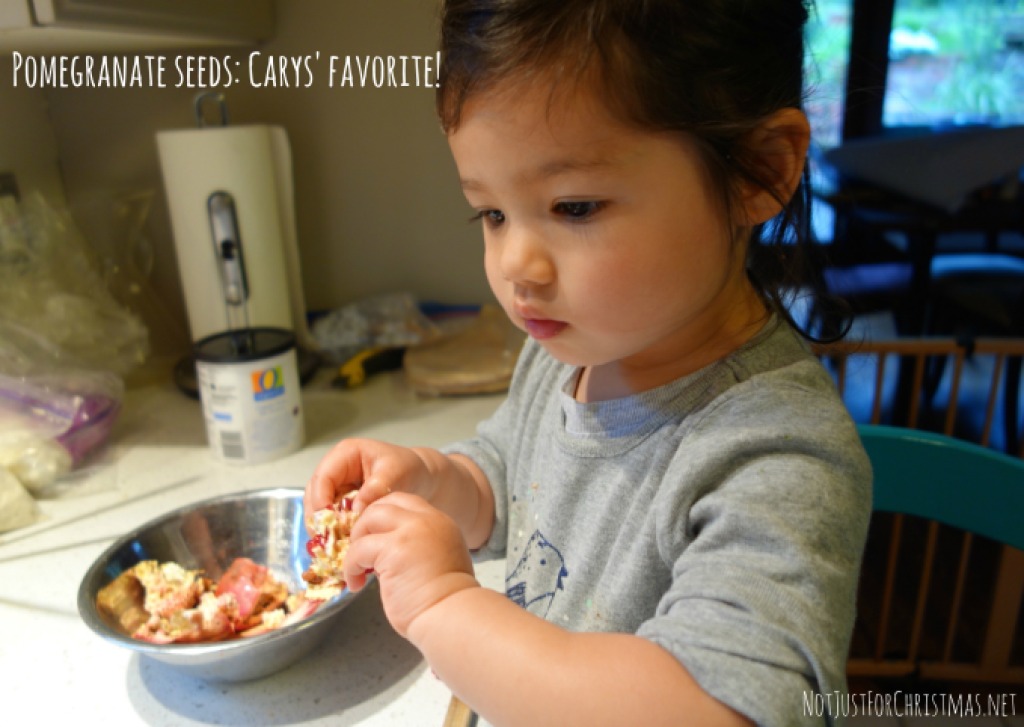 I’m so glad she’s enjoying cooking, and that we can enjoy it together.

(These photos were shot over two separate granola-making occasions, hence the two different shirts.  And I can see I’m going to have to keep the kitchen a whole lot tidier if it’s going to be a backdrop for regular photo shoots…)

Do you want to understand how your child’s brain is developing?

If there's just no way you can get to all the reading on your child's development that you want to do, check out my free four-page summary of Your Child’s Growing Mind by Jane M. Healy, Ph.D.

Carys' endlessly adaptable recipe for delicious scones
Baby-Led Weaning: How (and why) to try it

Cold off the Presses: 9 Things I’ve Learned About Making Sausages

Baby-Led Weaning: How (and why) to try it

I never thought I'd be a parent. This blog chronicles my adventures in motherhood while I attempt to not lose myself in the process.

Get Your Free Summary!