Baby-Led Weaning: How (and why) to try it

When I was still pregnant I stumbled on a NYT article with a fabulous quote about the baby food industry:

Jeff Boutelle, chief executive of Beech-Nut Nutrition [a manufacturer of prepared baby food], said, “When I got here a year and a half ago, the common sense was that the category was declining because birthrates were down.

“But I knew that birthrates had stabilized,” he added, “and babies are not getting any thinner.”

“Underlying our problem, there was a silent, pernicious trend going on that no one was really paying much attention to,” he said — mothers making their own food at home.

The mommy blogging machine went nuts over that quote, as I bet you can imagine.  And I sort of figure if there’s a multi-billion dollar industry riding on my decision as a parent, chances are I want to at least investigate how to do things differently.

A few months earlier I visited my friend Michelle in Ottawa (yes, she of the baby sign language advice) and was impressed at her toddler’s eating habits – she ate what the adults ate, at the table with the adults, and sometimes requested snacks between meals: “Daddy, can I have some pineapple?”.  How did Michelle do that?

She told me she’d used baby-led weaning (BLW), which in North America usually means allowing the baby to stop nursing when she is ready, but she had read that in the U.K. it means something entirely different: skipping purees, and introducing baby straight to solid foods.

As usual I did a lot of reading around on the topic (this is the classic book), but the basics are pretty simple.  This video explains it nicely, and here’s a lovely video of a child’s skill improving with BLW between 6 1/2 and 10 months.  The basics are:

Carys was on bottle strike for several months. It was a trying time. 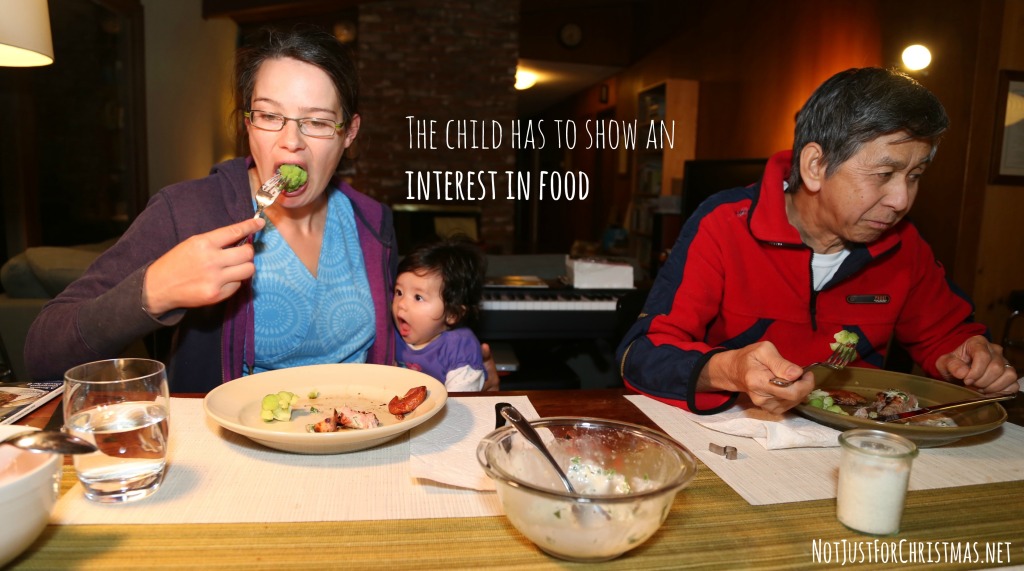 2. If your kid has excema or you have some other reason to suspect she might be allergic to things then be especially cautious about introducing one thing at a time.  We started by doing this but got lazy and abandoned it fairly quickly when we had no problems.

3. Start with something soft.  Baby won’t really know how to move food around in her mouth for a while.  Carys was desperate to try some banana so we let her bite off a piece.  She held it in her mouth for a few seconds and then spat it out.  This was in early December 2014, so Carys was 5 1/2 months old.  (She would get that ’80s hairdo every night because her hair was still wet from her bath when we put her down to bed, so it would fall backwards and ‘set’ up.)

4. Stick with foods that are soft or suck-able for a while.  We would give her big pieces of steak to suck on.

5. Look up YouTube videos of kids gagging and choking (they are different) so you know what they look like.  In general, if they’re breathing, they’re OK.  You should sit really close to her and pay full attention to her for the entire meal for the first few weeks, until you’re sure she’s OK moving food around in her mouth and swallowing it. Cut any foods that you might naturally slice into discs (sausages, bananas…) into semi-circles to reduce choking risk.

6. Take a baby CPR class.  Then if the worst comes to the worst and she does start to choke, you’ll know what to do.

7. Put out a selection of foods and allow the child to choose what she wants to eat.  She may eat as much or as little as she likes.

We set a rule early on that food dropping accidentally on the floor is OK, but food thrown on the floor ends the meal.  (Overall I was pleasantly surprised at how not-messy this was once we got Carys into a high chair with a functional bib.)  I found I could often prevent her from throwing food by offering my hand for her to put food in if she was holding something she didn’t want to eat.  We did go through a phase where she would throw food on the floor to announce she was done, but now she picks up the plate to hand it to us and says ‘all done.’    You can always make up the calories with a milk later.  Or ice cream, I suppose.

8. She won’t actually get a lot of her calories from food for some months – at the beginning she’s just learning about how to move food around in her mouth and then how to swallow.  Don’t be surprised if milk feedings don’t taper off.  Carys nursed until my milk ran out at a year, and took four bottles a day after that even though she was also ‘eating’ breakfast, lunch, and dinner.  Over time the milk volume will decrease and the food volume will increase.  The BLW folks have a saying: ‘food before one is mostly for fun.’

9. My rule of thumb for meat is that if you can tear it apart with two forks, it’s probably soft enough.  Babies need a lot of fat, so go for high-fat foods – sausages, chicken thighs, pork shoulder…balanced with carbs like polenta, mashed potatoes, corn pancakes, etc. and vegetables.  I make my own sausages because commercial sausages tend to be very salty. The slipperiness of fat also makes it easier for the child to move the food around in her mouth.

10. You can’t really mix BLW with feeding traditional purees.  With BLW the child learns to move the food around in her mouth and later learns to swallow; early purees are so runny that the child just swallows them like she does milk, and doesn’t learn the mouth coordination skills until some months down the line when purees thicken up.  The two skillsets are different enough that it may be hard for baby to manage them both.  You could potentially still incorporate runny foods like soups into BLW, but you can’t do ‘part-time BLW’ by incorporating occasional solid food into a mostly-puree diet.

By Christmas 2014 things were getting a bit out of control – we would have to practically hose her off after each meal.

Alvin’s parents came out to live with us and take care of Carys for two months at the end of 2014 (thanks, guys!), so they were here during this little experiment.  They were…shall we say…’hesitant’ about the whole thing.  They were worried Carys was going to choke.  She did gag several times (a baby’s gag reflex us much further forward in her mouth than an adult’s) but she never choked.

We hired a nanny after Alvin’s parents left and I painted one of our cabinets with chalk paint so we could keep a running list of things Carys liked and didn’t like.  It turned into a celebration of foods she likes as the only things she didn’t like were pomelo and white rice (she now does eat white rice).

For a while she never refused any food (except pomelo and white rice).  She’s a bit pickier now – she gravitates toward meat, and is much more selective in terms of her vegetables.  I can’t promise you that BLW will give you a non-picky eater; I’ve certainly heard of people who have done it and have ended up with kids who are picky eaters.  But I can tell you that Carys has never refused to try any food, ever, and has a palate broader than a lot of adults I know.

In February 2015 we went back to Kaua’i (we went there on our honeymoon, and now it’s the only place on the planet Alvin wants to go on holiday) during Alvin’s paternity leave.  Carys was an old hand by then, tackling (cooked) sushi with aplomb.

Do you want to understand how your child’s brain is developing?

If there's just no way you can get to all the reading on your child's development that you want to do, check out my free four-page summary of Your Child’s Growing Mind by Jane M. Healy, Ph.D.

The New Snack-Like Toys: 1.35 billion* missed opportunities to connect with our kids

My Take: How an Adventurer Becomes a Parent

Time for a playroom tour!

I never thought I'd be a parent. This blog chronicles my adventures in motherhood while I attempt to not lose myself in the process.

Get Your Free Summary!